I Live in Terror of the Creepy Elves – Emotion in Writing

Do they smoke dope at an elvish solstice festival?

I know it sounds like a frivolous question, but I grappled with it for several hours yesterday. You see, I’m writing a story about Santa Claus, and he’s an elf, and the next thing that happens in the story requires a bunch of elves all together in a jolly horde. So, I needed to create an elvish solstice festival. Obviously. But then I had to describe the damn thing.

What do big groups of elves do for fun? I’m not talking about those gangly, pasty Tolkien elves that creep me out, and that would creep you out too if you met one of the pouty, immortal bastards. I’m talking about happy elves that clean your house in the middle of the night and make toys and steal your firstborn child if you can’t guess their name. You know, elf hijinx. But what do big gangs of them do for a good time?

I thought of lots of things they might do. Dancing around elf-sized solstice-poles, holding shoe making contests, dueling with candy canes, and so forth. None of it seemed right. I liked the image of the teenage, future St. Nick and his friends hiding behind a giant toadstool and smoking a joint. But that didn’t seem right either. I felt like a crummy writer. I hated my brain, and I wanted to beat it to death with tequila.

My fourth tequila shot reminded me of something I learned in improvisational acting. When you want to start a scene, don’t think about something happening. Go with an emotion.

Okay, you may not relate to that, so try this. Think about when you were five years old and you wanted to tell a fib. Some enlightened parents call it telling a story. My parents called it being a lying little shit. Whatever you call it, you needed to tell something that wasn’t true. It’s just like being a writer, except that five-year-olds don’t get paid, and writers don’t get paid either, but they get lots of rejection letters that make them think about tequila and smoking dope.

Anyway, your five-year-old self may start his lie with, “What happened was, I was standing in the kitchen, and then I was just playing, you know, and just standing there petting the dog, and then the dog jumped on the table and then knocked the baby on the floor…” You know the whole time you’re talking that you knocked the baby on the floor when you climbed the height chair to grab a fist full of cake frosting. This pathetic lie ends with you locked in the broom closet for a week and fed only spaghetti noodles slid under the door. All because you just talked about stuff happening.

Instead, go with emotion. You should start your lie with a hurricane of tears, and then shriek, “The baby’s going to die! Don’t let the dog kill me too!” This is more like it. Your mom is so freaked out that she never considers you might be a lying little shit. This lie ends with the dog tied to a stake in the backyard and you getting a popsicle.

So how did Mr. Tequila help my five-year-old self create an elvish solstice festival? Instead of trying to imagine what was happening at this festival, I took each character in the story and wrote about his favorite thing at the festival, and why it was his favorite thing. It didn’t exactly write itself, and the four tequila shots didn’t help. But when I’d finished it felt right and made sense, and I had a realistic place for my characters to do some dumb stuff. Well, as realistic as an elvish festival can get.

And no, they don’t smoke dope at an elvish solstice festival. Snorting lines of pixie dust is another matter. 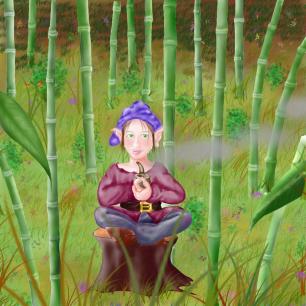 Yeah, we know what’s in that pipe, Sparky.